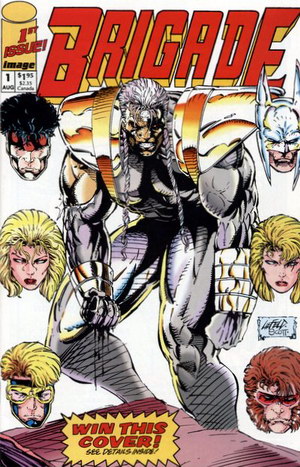 Appearing in "Blood Brothers, Part 1: A Sort Of Homecoming"Edit

Synopsis for "Blood Brothers, Part 1: A Sort Of Homecoming"Edit

Blood Brothers, Part 1. Story by Rob Liefeld, Marat Mychaels, and Eric Stephenson. Art by Marat Mychaels and Norm Rapmund. Continued from the Brigade mini-series. The Brigade team returns from their mission in outer space only to be blind-sided by Battlestone's past. Bloodstrike, the government's elite group of metas, has been sent to bring the outlaw team down. In the first few moments of the fight, Stasis is killed, Cold Snap is crippled, and Seahawk and Kayo are taken down. Things aren't looking good for the home-team. Guest-starring Bloodstrike. Story continues in Bloodstrike #2.

Retrieved from "https://heykidscomics.fandom.com/wiki/Brigade_Vol_2_1?oldid=1431637"
Community content is available under CC-BY-SA unless otherwise noted.