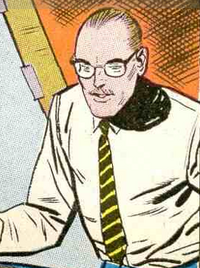 Bruno Premiani (1907-1984) was an illustrator known for his work for several comic book publishers, particularly DC Comics. Born in Trieste, Italy in 1907, he enrolled in an engineering college, but later switched to The School for Industrial Art, studying Decorative Arts and Stage Designing.

Premiani emigrated to Argentina in 1930. There he drew the page Visto y Oído for the newspaper Crítica and Patoruzu. Became a professor at the National School of Fine Arts.

In the United States, he drew most notably the original incarnations of the Doom Patrol in 1963 and the Teen Titans in 1964, both series being cult favourites that have survived in one form or another since their original creation for the DC Comics universe.

He is also cited as the original artist for the first adventures of Cave Carson, a spelunker/geologist and adventurer also part of DC's fictional pantheon since 1960, and is among the first published Tomahawk artists.

His work for the American market dates as far back as 1937 in the pages of Detective Comics. Bruno Premiani is the author of the illustrated book El Caballo, first published in 1957, a great source of information about the anatomy and history of the horse for artists. In the 1970's, he drew numerous illustrations for the magazine Anteojito, published in Buenos Aires by Manuel García Ferré.

Bruno passed away in Buenos Aires, Argentina, in September of 1984.

Retrieved from "https://heykidscomics.fandom.com/wiki/Bruno_Premiani?oldid=1505233"
Community content is available under CC-BY-SA unless otherwise noted.