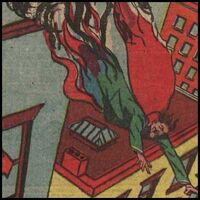 When Engine Company No. 5 was called to put out the fires of a chemical plant, it was the notorious pyromaniac known as The Bug who was burning the town down.

Not much is known about the arsonist, but his chemical fire did create the hero Fireball when he left fireman Ted Tyler for dead inside the burning laboratory. Miraculously, Ted survived the fire and it was later revealed that he could absorb fire due to the mixture of chemicals that spilt on him.

The Bug was sought by Fireball, and may have died during their last encounter.

Retrieved from "https://heykidscomics.fandom.com/wiki/Bug_(Earth-MLJ)?oldid=1580525"
Community content is available under CC-BY-SA unless otherwise noted.