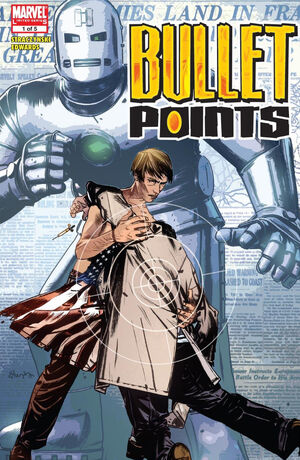 The miracle wasn't integrating the Iron Man suit into Private Rogers' body, the miracle was how God managed to fit a heart that big into such a small body.

In the Bullet Points Reality, Doctor Abraham Erskine is killed 24 hours earlier, thus causing Project: Rebirth to never see completion, and Steve Rogers to never become a Super Soldier. Instead, he refuses to believe there is nothing he can do for his country, and is opted into the Iron Man Project, which was previously abandoned due to the size constraints of the operator as well as the need to hard wire the armor to the operator's heart.

Rogers endures excruciating surgery for months on end in order to speed the process of integrating his body into the Iron Man suit and get into the War he knew was coming. On August 7, 1942, at 4:27 a.m., the Iron Man project is unveiled. From then on, Rogers pushes his body and the suit to their extreme limits in order to drive back the Nazis and win the war for America.

Meanwhile, a young Private Ben Parker was killed defending Dr. Erskine. His funeral is attended by his brother Richard and his wife Mary, along with his widow, May. Years later, a teen-aged Peter Parker faked permission to go on a field trip with his class to the New Mexico Jemez Mountains, to learn about the Manhattan project. While there, he and two friends ditch the rest of the group, hot wiring an army jeep and getting stranded when it runs out of gas. While walking back to the gas station, Peter finds himself smack dab in the middle of a live Gamma Bomb test!

Retrieved from "https://heykidscomics.fandom.com/wiki/Bullet_Points_Vol_1_1?oldid=1415086"
Community content is available under CC-BY-SA unless otherwise noted.