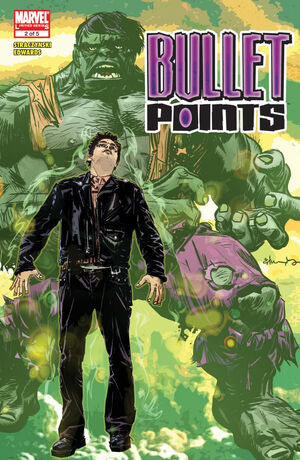 Whatever may have happened to him, Parker's still a fifteen-year-old kid. Sooner or later, one way or another, he'll come after her. And we'll be here, waiting for him.

Appearing in "Trajectories in Flight"Edit

Synopsis for "Trajectories in Flight"Edit

Peter Parker wakes up in a hospital, with no memory of what happened except for a bright light and the desert turning green. The doctors are amazed he wasn't vaporized by the Gamma Bomb. May takes him home to New York.

On the streets, Peter is tripped by his 'friends', who are mad at him for getting them in trouble over ditching the class trip. As they make fun of him for being a loser, he changes into the Hulk, and begins smashing up midtown. Cops shoot at him, having no effect, and just as he is beginning to rage again, he notices Aunt May, who recognizes him, and falls on the ground. He tries to go to her in his Hulk state, but the police keep him back. He leaps away in frustration while May is taken to the hospital.

Meanwhile a mid-40's Steve Rogers is talking with an old friend of his, Reed Richards. It seems Steve has recognized Richards' hard work over the past couple decades, and wishes his friend to continue working on his dream, a ship that runs on Cosmic Rays, instead of staying on with Project: Iron Man. Reed reluctantly agrees.

While Peter calms down by throwing around some trains, May is being visited by General Ross in the hospital while she recovers. When a nurse sends Ross out the door, his confidant asks why they're so interested in May anyway, and Ross claims that Peter is a threat to National Security.

Reed, together with his wife, Sue, are celebrating the creation of his ship, while a saboteur plants a bomb on board!

Retrieved from "https://heykidscomics.fandom.com/wiki/Bullet_Points_Vol_1_2?oldid=1415087"
Community content is available under CC-BY-SA unless otherwise noted.