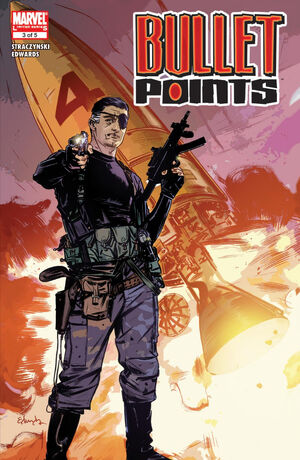 Appearing in "What Goes Up Must Come Down"Edit

Synopsis for "What Goes Up Must Come Down"Edit

Reed and Sue talk about how their first trip into space is going to make them all famous while a saboteur continues to plant a bomb on their ship.

Steve Rogers and General Ross discuss the Peter Parker problem, and while Steve remembers Parker's uncle, they both agree that The Iron Man has to come out of retirement to sedate Peter.

While the Four make their initial blastoff to their first fantastic journey, Peter sneaks into the NYC hospital to see his Aunt May for the last time. While he's there, she warns him that it was a trap, and Iron Man walks in to take him down.

The darts that have been specifically prepared to penetrate the Hulk's skin bounce right off of Peter as he's transforming, and the fight between Iron Man and the Hulk tears through the window and onto the street.

Steve prevents any of the nearby army from helping him, to keep them from getting hurt, but takes a nasty beating as a result. As The Hulk squeezes the life from him, Steve apologizes for failing to save him, and May screams for Peter to stop from the Hospital window, her voice being the only thing that can stop the Hulk. He leaps away as the Army collects Rogers' broken body.

Richards' rocket explodes, and they plummet to Earth. He arises from the crash to find his wife, brother-in-law, and best friend all dead, along with his left eye.

Rogers is given a highly-decorated funeral while Reed attends his friends' alone. Reed is approached by an agent from SHIELD, who tells him there's a job opportunity where his extra-ordinary genius can be put to work and he can disappear from the world. He takes it.

Peter hides in a cave with no where to go.

Retrieved from "https://heykidscomics.fandom.com/wiki/Bullet_Points_Vol_1_3?oldid=1415088"
Community content is available under CC-BY-SA unless otherwise noted.