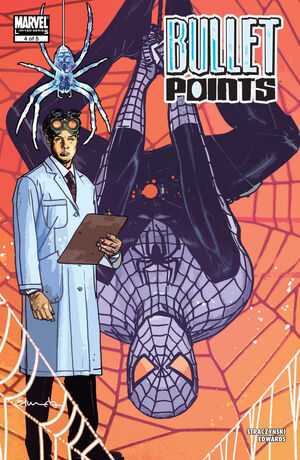 All hail Galactus, Devourer of Worlds!

Appearing in "The Ripples Continue..."Edit

Synopsis for "The Ripples Continue..."Edit

The bullet that killed Doctor Erskine 24 hours earlier than on Earth-616 has been creating ripples through out the Bullet Points reality for decades. Starting with Steve Rogers not becoming a super soldier, but the Iron Man instead, and most recently turning Peter Parker into The Hulk, while Reed Richards became Director of SHIELD. But the ripples aren't finished yet.

Richards poured himself into his work, not allowing himself to grieve over his lost friends and family. He made SHIELD the most advanced anti-terrorist organization on the planet, recruiting every specialist he could, including a Doctor Stephen Strange. Strange was about to leave for Tibet when he changed his mind and joined SHIELD instead. There, his bones were made to be unbreakable, and he would never need to travel to Tibet in his lifetime.

So Baron Mordo ascended to Sorcerer Supreme unchallenged, and was killed by Dormammu when he was not able to tap into his full potential due to his lack of moral clarity. The Ancient One continues to refuse to die until one day a worthy successor arrives.

Much of the rest of the world went on in parallel with 616, Namor rules Atlantis, Doom rules Latveria, Thor reigns in Asgard, Professor X raised his X-Men against Magneto, and Daredevil continues to fight against the Kingpin in Hell's Kitchen.

Peter Parker wanders the continent, staying away from the public and keeping to himself, until eventually he is generally forgotten by almost everyone.

Doctor Richards is interviewing Tony Stark and Stark Industries to take over the Iron Man project, so many years after Steve Rogers was killed. Stark asks if he can be the next Iron Man, but Richards has his own plans, with Colonel Bucky Barnes to take up the mantel. Barnes explains that he feels he owes a debt of gratitude to the original Iron Man, and this would the best way to repay that debt. After a small argument, Stark agrees that Richards is in charge of the project, and can pick the candidate.

Stark goes with Richards to meet a new recruit, and gets Bruce Banner's backstory on the way. Doctor Banner felt personally responsible for Peter's transformation, and dedicated his life to finding out how it happened. Soil, mineral, plant, and animal samples were taken from the Gamma Bomb blast zone to be studied further for solutions to the Hulk problem. Banner came to Richards with the idea to find Peter and get a sample of his blood to help figure out a cure, but Richards refused the idea, stating that Doctor Banner was much too valuable to the project to be lost in an accident with Peter.

Disheartened, Banner returned to his work, preoccupied by the idea that he was not allowed to see through. He instead begins dissecting a spider that had been collected in the blast zone, which he thought to be dormant or dead, but instead bites him, infecting his DNA.

Banner told no one about it, hoping nothing would come of the incident, but he was wrong. He underwent an extreme reaction due to having been bitten as a full-grown adult, gaining abilities like wall-crawling, web-spinning, enhanced strength, speed and agility. When he escaped from the Military Installation, it took SHIELD two years to find him, and years more of intensive research, therapy and medical treatments to bring him back under control. Banner would have to undergo rigorous monitoring and be medicated for the rest of his life, but he would ultimately serve as an asset to SHIELD as Spider-Man.

As Stark and Banner make their introductions, Richards is called to the war-room for an interstellar matter. Galactus and the Silver Surfer have arrived in New York City.

Retrieved from "https://heykidscomics.fandom.com/wiki/Bullet_Points_Vol_1_4?oldid=1415089"
Community content is available under CC-BY-SA unless otherwise noted.