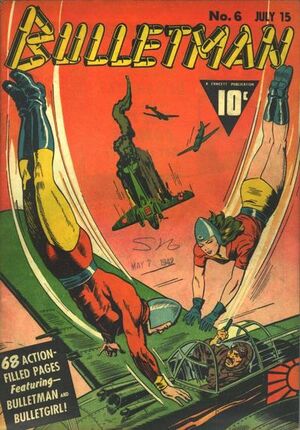 Disguised as a Swami he apparently gives money away to people, however they are forgeries, as the flying detectives discover after attending a performance. The 'Swami' takes the real change for the money and gives forgeries. They attack him, but he escapes by removing his Swami outfit then giving them false information. They track him down by analysing the ink and going somewhere which has ordered a lot of the ink type, but are captured after Bulletgirl tries to save a falling crook, but is hit on the head with an ink bottle, and when Bulletman sees if she is all right he is seized, and they both have their hands tied while the Engraver tries to kill them by filling the room with gas. Bulletman frees himself on glass shards, breaks open a window for air as Bulletgirl has nearly been overcome, then frees Bulletgirl. They track the Engraver to a floating Casino, as Bulletman releases they were bound with sailor's knots, both the thugs are killed, and the Engraver later falls to his death in a furnace after trippng over.

Retrieved from "https://heykidscomics.fandom.com/wiki/Bulletman_Vol_1_6?oldid=1390607"
Community content is available under CC-BY-SA unless otherwise noted.