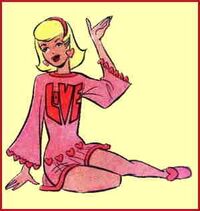 From the 1950s to its slow, gradual demise, Harvey Comics concentrated on reaching very young children, with protagonists such as Little Dot, Wendy the Good Little Witch and Spooky both belonging and appealing to that demographic. Even when they departed from little kids as heroes, they usually still tried to attract that kind of reader, as they did with Stumbo the Gian. But they did make at least an occasional stab at horror or superheroes, such as Black Cat Mystic or Pirana. Bunny, who debuted with a December, 1966 cover date, was one of their few tries at the teenage humor market, which was, and remains, dominated by Archie.

But whereas Archie is designed for timeless appeal — most Archie stories can be reprinted a decade or two later without mystifying readers — Bunny (surnamed Ball) was aggressively, even obsessively trendy. So much so, she's even been described as an older-than-usual representative of Harvey's kid-with-obsession genre, typified by Richie Rich with his attitude toward money and Little Lotta with hers toward food. A Bunny story could never be reprinted without looking like a late 1960s period piece. Even at the time, it seemed to lay on the love beads and "psychedelic" display lettering a bit thick. She even had a blurb attached to the logo, calling her "Queen of the In Crowd" and adding that she was hip, mod and boss, which is about as "'60s" as it gets. Bunny was to teenage humor what Brother Power the Geek was to superheroes.

More than just Archie went into her makeup. She also borrowed from Marvel's then-longest running character, Millie the Model, a blonde model with a darker-haired scheming rival (in Bunny's case, Esmerelda, aka Esmy). And she was a bit reminiscent of Katy Keene, and not just in that much of what she wore came from readers' designs. In Bunny's comic, as in Katy's, visual appeal came from placing her (as an actress or model) in exotic settings so she could show off what she looked like when she dressed to fit the theme. Also like Katy, she had a little sister (Honey) who had adventures of her own.

But she owed her painfully discordant Sixties-ness to nobody. Even if The Teen Titans were similarly afflicted at the time, she did it more and worse — in fact, it's as if her entire raison d'etre was to parody the decade of student activism and radical youth fashions, even while living it. To make matters worse, this teenage girl comic was edited, written and drawn by middle-aged men who were probably, like most middle-aged men, unable to communicate with their own daughters. To vary the dialogue, in which everything that wasn't "groovy" was "outasight", they made up their own slang. Things could also be "zoovy" or "zoovers" or even, in extreme cases, "yvoorg" — which was obviously "groovy" spelled backward, but no hint was ever given as to how it might be pronounced. This ploy may have worked in Penny, whose creator was more subtle about it, but here, it just made readers snicker.

Bunny's only appearance outside her own comic was in the second and last issue of Harvey Pop Comics, dated November, 1969. The first issue had featured The Cowsills, who played what we now call "bubble gum rock". At home, she shared a few back pages with Fruitman, a superhero parody like Captain Sprocket or Wonder Warthog,

The original idea behind Bunny was to be a doll, rivalling Barbie. Harvey was approached as a possible cross-promotor, so the comic book and the toy could support each other. The company folded before the dolls were produced, but the publisher went ahead with the comic.

Harvey never much got into the practice of giving credits to its writers and artists; thus, Bunny's creators aren't documented. But cartoonist Hy Eisman (Katzenjammer Kids, Little Iodine) is a good bet. Others whose work has been spotted in the run include Sol Brodsky (Israel Waldman's partner in creating Skywald Comics, which published unauthorized versions of The Heap and Jo-Jo, Congo King) and Howard Post (Anthro, Jimminy & the Magic Book).

The intention may have been to move Bunny along with the times, but that ambition was never fulfilled because she wasn't around long enough for the times to change a whole lot. The final issue of the series was #20, dated December, 1971. Five years later, #21 finally hit the stands, but by then it was far too late for anything she said or did to have much meaning.

Retrieved from "https://heykidscomics.fandom.com/wiki/Bunny?oldid=1610700"
Community content is available under CC-BY-SA unless otherwise noted.