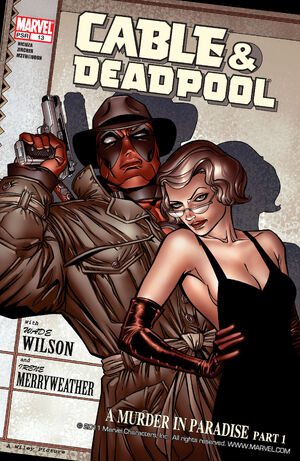 Appearing in "A Murder in Paradise, Part One: Flaw & Disorder"Edit

A MURDER IN PARADISE" Part 1 (of 2) The book that refuses to be cancelled begins a new story arc! With Cable recuperating on his island haven of Providence, who else can investigate when there is "A Murder In Paradise"--? You know who. Say it. Go ahead. Picture it. Deadpool as a detective. Interrogating the most brilliant pacifists on Earth. Monk and Columbo have nothing to fear...

Retrieved from "https://heykidscomics.fandom.com/wiki/Cable_%26_Deadpool_Vol_1_13?oldid=1646214"
Community content is available under CC-BY-SA unless otherwise noted.