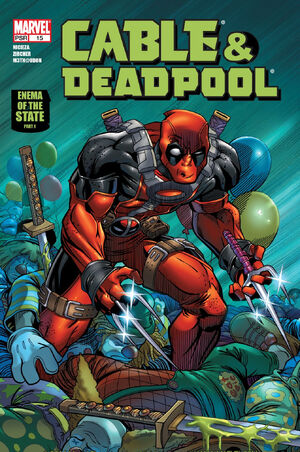 Appearing in "Enema of the State Part One: Killer Clowns"Edit

Deadpool is brainwashed by the mysterious group known as THE BLACK BOX to become a mindless assassin (which, honestly, didn't take much washing). So Deadpool does what comes naturally to him -- the OPPOSITE of what's expected! But hey, where's CABLE? And what are CANNONBALL and SIRYN doing in the book?

Retrieved from "https://heykidscomics.fandom.com/wiki/Cable_%26_Deadpool_Vol_1_15?oldid=1756474"
Community content is available under CC-BY-SA unless otherwise noted.