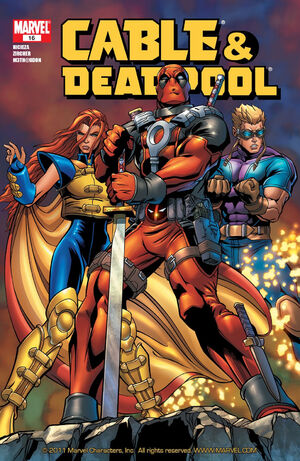 Appearing in "Enema of the State part 2: What If...?"Edit

"Enema of the State" continues, as Deadpool's search for Cable forces a fight with the new Horseman of the Apocalype -- the Agent of War named... Cable?! What the heck is Lord Apocalypse up to this time? And what the heck are Cannonball and Siryn doing in an alternate timeline?

Retrieved from "https://heykidscomics.fandom.com/wiki/Cable_%26_Deadpool_Vol_1_16?oldid=1646218"
Community content is available under CC-BY-SA unless otherwise noted.