Start a Wiki
Part of the 'Enema of the State', and 'Bosom Buddies' story arcs 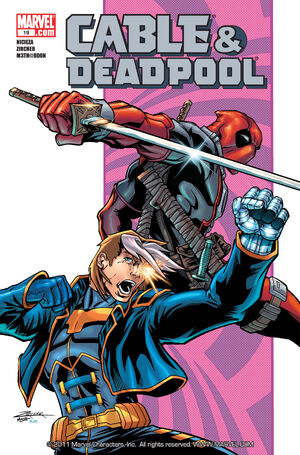 Appearing in "Enema of the State Epilogue/Bosom Buddies Prologue: Why, Where I Was Your Age..."Edit

Synopsis for "Enema of the State Epilogue/Bosom Buddies Prologue: Why, Where I Was Your Age..."Edit

After recent events, Cable’s body has been rejuvenated but is rapidly aging towards his regular age. Deadpool decides to do him a favor and takes him to Intercourse, Pennsylvania. Deadpool is disappointed to see the place doesn’t live up to its name and takes Cable into a bar, where the two of them tell each other about the events that formed their lives focusing on the events on their seventeenth birthday. Cable tries to figure out if he and Deadpool chose their way of life or if those choices were made for them by circumstances. Cable’s story is about the future where he and another soldier infiltrate a factory that created nannites. The nannites were implanted in his soldiers, making them walking bombs. Inside the factory, Cable discovers that his fellow soldier has been infected and the man panics and runs towards Cable’s troops. Cable is forced to detonate the bombs inside the man. Deadpool’s story is about his childhood as the son of a military man. His mother died when he was five and after Wade claims that his father turned to alcohol and became abusive and that his father got killed in a bar fight. Cable doesn’t believe this and, in Deadpool’s min’s eye, the true story is revealed: Wade himself turned to violence and vandalism. In a bar Wade is hanging with his friends, getting drunk and harassing an old man, when his father comes in, sober and in uniform and wanting to take him home. One of his friends hits his father with a beer bottle and grabs his gun. Wade tries to take the gun away from him, but accidentally makes his friend shoot. The shot hits Deadpool’s father and Wade watches his father die.

This stand-alone issue is an epilogue to “Enema of the State” and a prelude to “Bosom Buddies!”

Retrieved from "https://heykidscomics.fandom.com/wiki/Cable_%26_Deadpool_Vol_1_19?oldid=1507147"
Community content is available under CC-BY-SA unless otherwise noted.