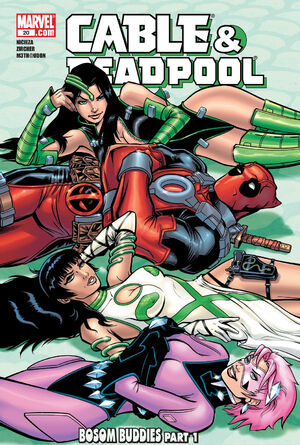 Did you ever have one of those lives...?

-- Deadpool after being mocked by the B.A.D. Girls

Deadpool has been unemployed for several months when his phone rings. He is hired to go to California and steal something from the Dominus Corporation. However, professional mercenaries/thieves called the B.A.D. Girls are trying to steal the same object: a hard drive. The B.A.D. Girls attack Deadpool to prevent him from getting the hard drive first and Black Mamba’s Darkforce powers knock out Deadpool and reveal his darkest fantasies: where he and Cable on the beach, with him giving Cable a backrub. When Deadpool wakes up and finds out that the B.A.D. Girls have overheard his fantasies, he desperately tries to prove his ‘masculinity’ to them, but the girls focus on their mission, as the hard drive is gone. Diamondback examines the log and notices that a freelance computer cleaner was there 20 minutes ago, concluding that the cleaner probably took the hard drive. The B.A.D. Girls then try to find out more information on the freelancer by hacking the Dominus phone records while fighting security. Meanwhile Deadpool takes another approach by beating up the company’s accountant for information on the freelancer. The trail leads Deadpool to Rand-Meachum Corporation on Long Island and he finds the freelancer there: it turns out to be his old friend, Weasel. Weasel claims to have been knocked out by an unknown person and that he didn’t steal the hard drive. He tells Deadpool that the hard drive, also known as the Dominus Objective, is a kind of computer virus that acts as a server. He claims that he is checking the Rand-Meachum computers to find out if his assailant stole anything. Iron Fist and Luke Cage enter and accuse Weasel of lying: nothing was stolen from Rand-Meachum, but the Dominus Objective infected their computers and they want to know why Weasel did it. Meanwhile on Providence, Cable and Irene discuss Cable’s policy of inviting people to Providence, even when the island is getting full. Irene worries that the world’s governments will see Providence as a threat sooner or later, but Cable tells her that he’s prepared. Later, Cable and Johann Kriek discuss the increasing population but Cable tells him that it is all part of the plan. When Johann wonders what the plan is, Cable jokes that he wants to rule the world, but Johann is not sure that he’s joking. Cable doesn’t reply, but wants a skimmer jet prepared for takeoff.

Naturally, our Merc With a Mouth is going to find it first, right? Well...only if he can outwit that superspy known as the CAT, and slide by the undulating charms of three gorgeous and deadly snake chicks--that's right--Black Mamba, Asp and Diamondback are back in business as the B.A.D. Girls!

And what's Cable doing during all of this...? Well, keeping an eye on Deadpool, since whoever owns the hard drive could very well own the world...

Retrieved from "https://heykidscomics.fandom.com/wiki/Cable_%26_Deadpool_Vol_1_20?oldid=1415970"
Community content is available under CC-BY-SA unless otherwise noted.