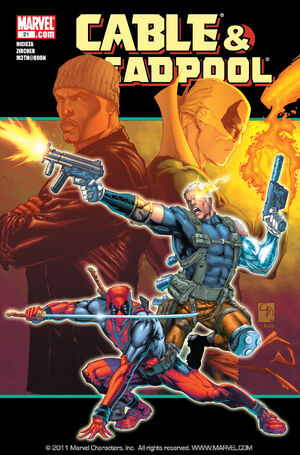 Deadpool tries to protect his friend, Weasel, from Luke Cage and Iron Fist, who claim that Weasel has infected their computers with a virus. At the same time, Deadpool thinks that Weasel has stolen the Dominus Objective, a computer hard-drive/virus that Deadpool was hired to steal himself. Cable comes to help Deadpool against Cage and Iron Fist, allowing Weasel to escape the building. Outside the building, the B.A.D. Girls, who also were hired to steal the Dominus Objective, tap into the security cameras to find more. They see Weasel, Deadpool, Iron Fist and Luke Cage running by, then Cable, who stops to talk to them. Deadpool, Iron Fist and Cage catch up to Weasel and want some answers. Cable shows up with the captured B.A.D. Girls and shows the others the security footage they have uncovered: a mysterious assailant knocked out Weasel. Weasel claims that this proves his innocence and Deadpool agrees, but Cable says that the assailant merely stole the Dominus Objective after Weasel already put it on Rand-Meachum’s computers. Deadpool is furious that Weasel lied to him and delivers him over to Rand and Cage. Diamondback uses the confusion to get away from Cable and Black Mamba uses her Darkforce powers to knock the heroes out while they escape. Waking up in some embarrassing positions, they all agree never to talk about this again. Weasel goes inside to clean up the computers, while he tells Iron Fist that he intended to uninstall the device once he was done. He was just testing out the Dominus Objective. Cage and Deadpool want to know what the Dominus Objective does and Cable explains that the device/virus sends all information to a single hub. He also has figured out who stole it and asks Deadpool if he wants to come along. Deadpool does, leaving Weasel behind to go to jail. Outside, police officers try to arrest Cable and Deadpool, but they simply teleport out, leaving Cable’s jet behind. The B.A.D. Girls have studied the security footage and have figured out the identity of the real thief and book a flight to Hong Kong. In Hong Kong, the real thief turns out to be the Cat, who hands the Dominus Objective over to Black Box. Black Box uses the objective to plug himself in into all the information in the world, saying that knowledge is power.