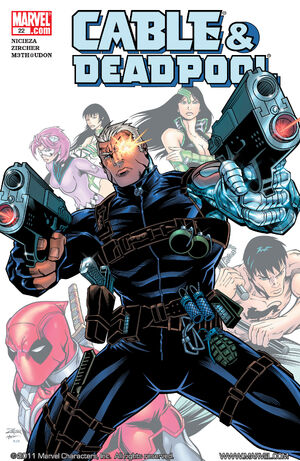 Rolaids only has seven letters.

-- Deadpool, upon being asked if he just misspelled his own name.

Appearing in "Bosom Buddies, Part 3 of 4: Crack the Internet in Half"Edit

Synopsis for "Bosom Buddies, Part 3 of 4: Crack the Internet in Half"Edit

Black Box has used the Dominus Objective, stolen by the Cat, to tap into the datastream all over the world. The Cat leaves after being paid, while Black Box focuses on his enemies Cable and Deadpool. On Providence, Cable and Deadpool are sparring while Cable explains the Dominus Objective to Deadpool. At the end he knocks out Deadpool and talks to Irene Merryweather. Irene tells him that she has filed a flight plan for Cable’s skimmer jet for New Delhi, but wonders if this won’t tip off Black Box that they are coming. Cable explains to her that the flight plan is a distraction; they will go to New Delhi another way. In New Delhi, Black Box informs his mercenaries, Rive and Makeshift that Cable and Deadpool are coming. Both are glad to take revenge on Deadpool, the man who killed them. Cable and Deadpool surprise them by arriving early. Deadpool is surprised to see the two female mercenaries alive, but fights them both. Cable confronts Black Box, claiming that he knows Black Box true identity. Deadpool kills Rive and Makeshift, but Black Box injects both Cable and Deadpool with cables coming from his arms and transports them to a virtual world filled with information of all kind. The incredible amount of data incapacitates Deadpool, but Cable swims through it. Black Box appears as a giant head and tries to overwhelm Cable with raw information. In Hong Kong, the B.A.D. Girls, also in search of the Dominus Objective, fight the Cat, hoping to get info out of him, but the Cat easily defeats the three women and offers them a truce. He confirms that he was hired by Black Box to steal the Dominus Objective, but he only accepted the mission after another person told him to. The same person also hired both the B.A.D. Girls and Deadpool to steal the Dominus Objective as well: Cable. In the datastream, Cable reminds Black Box that he used to be the world’s strongest telepath and that he is used to having all this information going through his head. He demonstrates by forming a gun from raw data and shooting the virtual Black Box, causing a feedback in the real world that explodes Black Box’s arm and releases Cable. Cable frees Deadpool, while Black Box is enraged. He has figured out that Cable has set him up. Cable and Black Box fight, while Deadpool is surprised to see Rive and Makeshift, both alive and willing to fight. He again kills them and sees another pair of their bodies on the floor, concluding that there is cloning going on here. Cable explains to Deadpool that this will all be logical to him once he sees who is in Black Box’s shell and rips the armor apart. The armor is empty, though Cable expected this. A voice from behind tells Cable and Deadpool that knowledge is the only thing you can take beyond the grave. Deadpool is turns around and exclaims “No!! It can’t be you. You… You’re dead!”

Retrieved from "https://heykidscomics.fandom.com/wiki/Cable_%26_Deadpool_Vol_1_22?oldid=1415972"
Community content is available under CC-BY-SA unless otherwise noted.