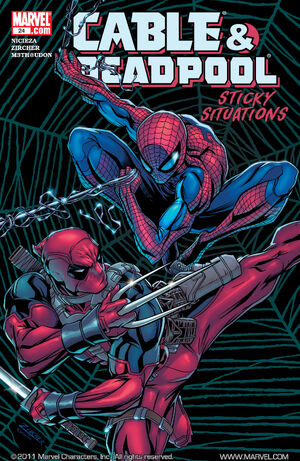 Cable has anonymously sent Deadpool on a mission to steal the military project “the Cone of Silence.” Infiltrating an Army base with a lot of violence, Deadpool finds out a reporter knows more about the project. Deadpool remembers that Irene Merryweather used to be a reporter and calls in her help. On Providence, Irene doesn’t want to help Deadpool, especially not by going all the way to Manhattan. Cable has good reasons though and Irene leaves shortly. Deadpool takes Irene coming to visit him personally the wrong way and hits on her, but not before she tells him that the reporter is the Daily Bugle reporter Ken Ellis. Ken Ellis is planning to surprise a general with some nasty questions on the Cone of Silence-project and takes Peter Parker along as photographer. Deadpool assaults their car and throws Peter from the Queensboro bridge before he even realizes that this would kill a normal human. Fortunately, Peter Parker saves himself and puts on his Spider-Man costume to save Ken from Deadpool and the two fight. Spider-Man easily gains the upper hand, so Deadpool decides to take somebody hostage. Cable is monitoring the fight though and decides to interfere. He asks Black Box to send information to Ellis’ PDA. Ellis receives the information that Deadpool can help and stops the fight, telling Spider-Man that Deadpool is his informant. Spider-Man is not convinced but doesn’t have any choice. The next morning, Ellis has his article on the general’s fraud while Cable manages to get the designs for the Cone of Silence. Irene wants to know what the Cone of Silence is. It turns out to be a forcefield, built with the intention to isolate Providence from the world. Nick Fury tells Captain America that he suspects that Cable is behind the uncovering of Cone of Silence project and orders Captain America to do something about Cable, who is becoming a bigger and bigger problem.

Retrieved from "https://heykidscomics.fandom.com/wiki/Cable_%26_Deadpool_Vol_1_24?oldid=1415974"
Community content is available under CC-BY-SA unless otherwise noted.