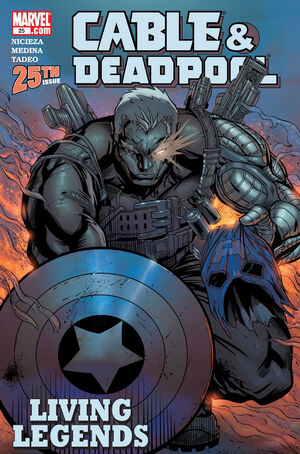 And you understand order and discipline, honor and principle... but you're a captain... and I've been a Four-Star general, head of the joint chiefs of staff, a president and a pope all rolled into one.

As S.H.I.E.L.D. thinks that Cable is a would-be world conqueror and plans on using nuclear weaponry to stop him, Nick Fury asks Captain America to take a look on Providence and inform them what is really going on. Captain America takes the alias of Roger Stevens and arrives on Providence as just another refugee. During the next two weeks, he enjoys the peaceful life on Providence and comes to wish more of the world were like it. He also observes Cable and comes to the conclusion that Cable is not a madman. One evening, he returns to his apartment and finds Cable there, holding Captain America’s shield. Cable tells Captain America that he has been aware of his presence on Providence for some time and that the shield was once his. In Washington D.C. Irene meets with an anonymous contact who tells her that Deadpool runs a great risk on his current mission: if he is ‘infected,’ he will take a ‘virus’ back to Providence that will allow the Commission on Superhuman Activities to spy on Cable. Deadpool’s mission turns out to be entering the Avenger’s Tower. Cable and Captain America fight for a little while, but the fight is ended when Cable reveals what he has been up to the last two months: he has used various devices to mechanically simulate his telepathy and telekinesis. Cable links Captain America’s mind to the Infonet and shows him a mission where Cable went on in the future to secure Captain America’s shield. After this scene, Cable hopes to convince Captain America that he is doing nothing wrong and in fact is saving the world, but Cable’s perspective is over millennia and Captain America warns him that people will not be able to understand him. Cable offers peace and then tries a more underhanded approach: he shows Captain America that there have been secret surveillance systems installed in the Avenger’s Towers by the Committee on Superhuman Activities and offers to deactivate them. Captain America is insulted by the attempt to blackmail him. Cable tells him that he is free to leave, but thanks Captain America for coming and hopes he stays to finish a mural he begun. Captain America thinks about it and stays the next day to finish the mural.

Retrieved from "https://heykidscomics.fandom.com/wiki/Cable_%26_Deadpool_Vol_1_25?oldid=1676650"
Community content is available under CC-BY-SA unless otherwise noted.