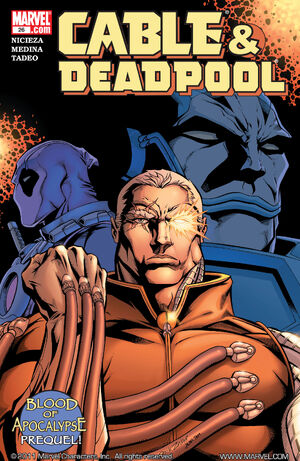 Thousands of years ago, a young Cable – then called the Traveler – kills Apocalypse – then simply called En Sabah Nur – in combat. Apocalypse’s followers, the Dark Riders, now wish to follow the Traveler, but he’s not interested in taking En Saban Nur’s place and tells Nur’s chronicler, Ozymandias, that being the most fit to survive means that you should help those who are less fortunate. As he watches the Traveler leave, Ozymandias mingles En Sabah Nur’s blood with the Traveler’s. Again in the past, though in a different time, “the Traveler” finds a caravan with advanced technology that is sent to Ozymandias. The Traveler wants to know how Ozymandias received technology from the future, but Ozymandias corrects him: the technology is from the past. In the present, Cable has been missing for two weeks. Irene Merryweather and Deadpool search for him with a little help from Black Box and Johann Kriek. They learn that Cable has been investigating several museum thefts, so they follow his trail. Later, Deadpool and Irene have tracked the museum thieves to Akkaba, Egypt, where they find a Sphinx with Apocalypse’s face. They enter the Sphinx and Deadpool fights its guardians, the techno-organic Dark Riders. While he does so, Irene has Black Box remotely translate the symbols inside the Sphinx and discovers that they are waiting for the rise of Apocalypse. A smaller Sphinx, made out of various alien technologies, is found within the Sphinx and Cable steps out of it, followed by Ozymandias. The Dark Riders bow to Cable, who tells Deadpool and Irene that he has no intention of stopping the rise of Apocalypse.

Retrieved from "https://heykidscomics.fandom.com/wiki/Cable_%26_Deadpool_Vol_1_26?oldid=1415976"
Community content is available under CC-BY-SA unless otherwise noted.