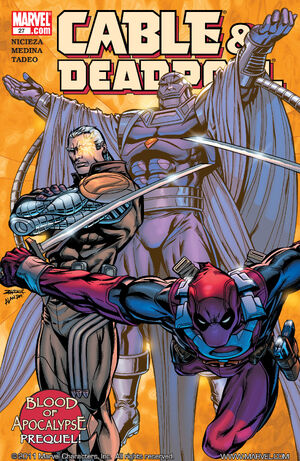 In the past, Ozymandias takes the Traveler – a young Cable – to the source of technology that he was moving; the Celestial Ship. Inside, he discovers that En Sabah Nur has been infected with his techno-organic virus from their previous encounter, allowing him to take control of the Celestial Ship and regenerate. The Traveler uses his own techno-organic arm to plug into the Ship and override Nur’s control, telling the Ship to launch into outer space. Outside, he tells Ozymandias that En Sabah Nur will return as Apocalypse. In the present, Cable and Ozymandias tell Irene and Deadpool that they want Apocalypse to return. Irene and Deadpool think that Cable has gone insane, but follow him. Inside Apocalypse’s Sphinx, they find out that Apocalypse’s techno-organic infection allows him to regenerate from even a single drop of blood; a pool of blood and organs is turned into a new body for Apocalypse by the virus. Cable confesses that he is responsible for infecting Apocalypse with the virus. Apocalypse rises and attacks Deadpool. After a short fight with Apocalypse and his Dark Riders, Cable tells Apocalypse about the recent decimation of the mutant population. Cable plans for Apocalypse to be a common enemy for mutantkind to unite, telling Apocalypse that he will fail at his plans. Cable also tells Apocalypse that he’s planning to make Apocalypse meaningless by making everybody strong. After Cable and his friends leave, Ozymandias suggests to Apocalypse that he should become a leader instead of culling the mutant population. Weeks later in Mexico City, the Thin Man hires G.W. Bridge and Domino to end the incursion in Rumekistan. Deadpool and Cable are involved, so Bridge and Domino are interested in helping out.

Retrieved from "https://heykidscomics.fandom.com/wiki/Cable_%26_Deadpool_Vol_1_27?oldid=1415977"
Community content is available under CC-BY-SA unless otherwise noted.