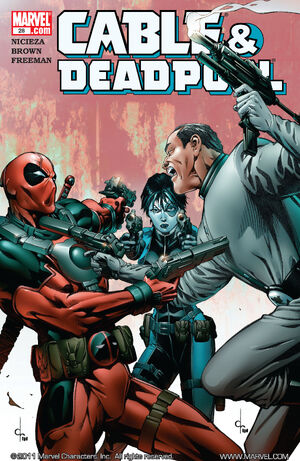 I always forget (or just block out to spare myself the agony) what Wilson's most lethal weapon is... his mouth! He'll talk nonsense until you surrender or commit suicide.

Appearing in "The Domino Principle, Part 1 of 2: For King and Country"Edit

Synopsis for "The Domino Principle, Part 1 of 2: For King and Country"Edit

Deadpool has been hired to help the resistance movement of the Central European country of Rumekistan, which has been taken over by the Flag-Smasher and Ultimatum. Domino has been hired to find out if the replacement for Flag-Smasher is going to be even worse and worries about Deadpool’s involvement. She follows Deadpool around, while he fights Ultimatum guards and steals one of their communication devices. Domino meets up with an old friend, Michael Straka, who has become a captain in Ultimatum, to gain information. Later, the Resistance-leader, Petrovic, introduces Deadpool to their technician on this mission: Weasel. Deadpool and Weasel are happy to see each other and settle their past differences. Meanwhile Black Box, Prester John and Irene Merryweather observe the situation in Rumekistan, but don’t get involved themselves. Irene hands reporter Ken Ellis information on the Superhero Registration Act in exchange for information about the public’s opinion on Cable. Back in Rumekistan, Domino decides to interfere and enters the Resistance base. She and Deadpool fight and, while she manages to defeat him, during the fight she has become convinced that she is working for the wrong side. Deadpool and the Resistance flee when Ultimatum arrives. The next morning, the Flag-Smasher makes his public speech, but the Resistance makes their move. They override Flag-Smasher’s microphone and ridicule him, while Deadpool prepares to shoot Flag-Smasher with a sniper rifle. Flag-Smasher orders Michael to shoot at the public, who are laughing at him, but Michael hesitates. Domino decides to make the tough decision and shoots Flag-Smasher herself. Petrovic gets on stage and introduces the new leader of Rumekistan to the people: Cable. Domino tells herself that her work here isn’t finished.

Retrieved from "https://heykidscomics.fandom.com/wiki/Cable_%26_Deadpool_Vol_1_28?oldid=1415978"
Community content is available under CC-BY-SA unless otherwise noted.