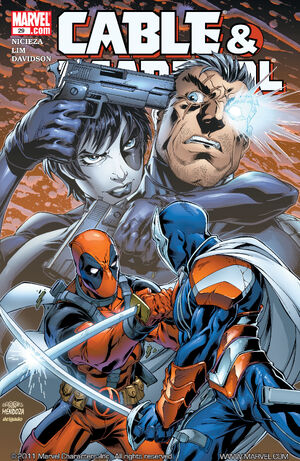 Appearing in "The Domino Principle, Part 2 of 2: The Politics of Fear"Edit

There’s a new president in charge of Rumekistan and he has a blue glowing eye and a buncha metal on his arm... but he also has a gun to his head. Will DOMINO pull the trigger? Meanwhile, DEADPOOL finds out that the man who jeopardized the country to begin with is still involved in Rumeki politics... it’s DP vs. CV as CITIZEN V, the spy with style, goes up against the Merc With a Mouth!

Retrieved from "https://heykidscomics.fandom.com/wiki/Cable_%26_Deadpool_Vol_1_29?oldid=1646219"
Community content is available under CC-BY-SA unless otherwise noted.