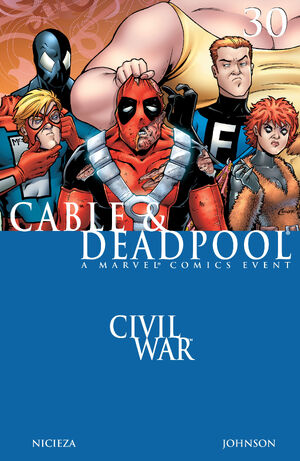 Appearing in "The Hero Hunter"Edit

With CIVIL WAR tearing the Marvel Universe apart, only one man can sew it back together... DEADPOOL?! Well, who else would make the perfect mercenary Hero-Hunter? In an effort to do his part, Deadpool crosses paths with the GREAT LAKES AVENGERS, and slices and dices his way to DAREDEVIL—THE MAN WITHOUT FEAR! What happens when the Merc with a Mouth faces the Sightless Scarlet Sentry? And where does CABLE stand in all this? Where he always does... pretending he’s above the fray. Then why is he having a secret meeting with CAPTAIN AMERICA...?

Retrieved from "https://heykidscomics.fandom.com/wiki/Cable_%26_Deadpool_Vol_1_30?oldid=1646221"
Community content is available under CC-BY-SA unless otherwise noted.