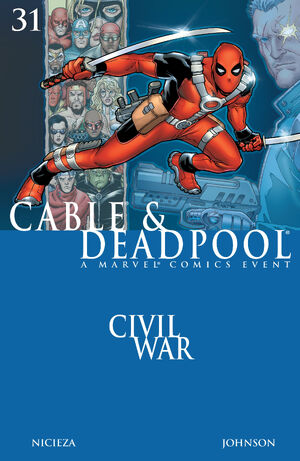 Appearing in "Casualties of War"Edit

DEADPOOL vs. the RENEGADE HEROES! Can the government’s newest Superhuman Marshall buff his badge and kick some butt? And what’s CABLE up to? Well, with two countries to run, he wouldn’t have any interest whatsoever in using this whole Superhuman Registration Act for his own advantage, would he...? No, not our Cable... that would just be so... insidious...

Retrieved from "https://heykidscomics.fandom.com/wiki/Cable_%26_Deadpool_Vol_1_31?oldid=1646222"
Community content is available under CC-BY-SA unless otherwise noted.