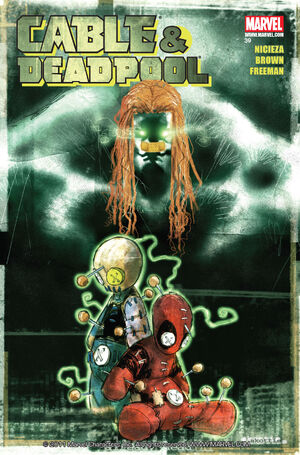 I don't them. I don't need to. I know who I am. In T-Ray's mixed-up memories--ones that he shared with me--I was wearing my Deadpool costume when he found me. But I didn't become Deadpool until after I left Project X--after I got this healing factor to cure my cancer. After my mom dies of cancer when I was a kid. After my dad died in a barfight because of one of my drunken friends. After I'd been kicked out of the army. Which I'd sighed up for as Wade Winston Wilson. Because that's who I am. And anyone who says differently... is just imagining things.

Deadpool goes to the bar with no name to find the location of T-Ray. It turns out to be a farmhouse in New Jersey and breaks in, confronting T-Ray about him pretending to be the real Wade Wilson. Deadpool claims to have full memory access since Cable restored his mind, and then rescues Sandi and Outlaw from T-Ray.

When they return to base, they hear about Providence currently being attacked by a giant alien, while Cable is nowhere to be found.

Retrieved from "https://heykidscomics.fandom.com/wiki/Cable_%26_Deadpool_Vol_1_39?oldid=1415989"
Community content is available under CC-BY-SA unless otherwise noted.