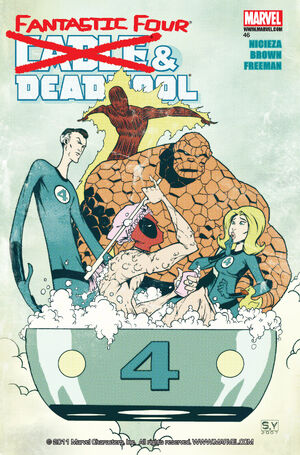 Appearing in "Eight To Save The Universe!"Edit

Since Deadpool is twice as much trouble as anyone in the Marvel Universe, the only logical people who could possibly rescue him and Bob, Agent of Hydra, from their temporal tantrum are... the FANTASTIC EIGHT?

Twice the guest stars! Twice the fun! But not twice the price! How can you say no?

Retrieved from "https://heykidscomics.fandom.com/wiki/Cable_%26_Deadpool_Vol_1_46?oldid=1722647"
Community content is available under CC-BY-SA unless otherwise noted.