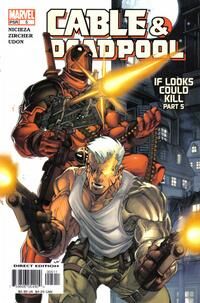 Appearing in "If Looks Could Kill, Part 5: Not That There's Anything Wrong With That"Edit

One of them's frozen solid, the other is a pile of blue goo! They'll need each other to survive -- and it might involve exchanging bodily fluids! But even if they save each other, they still have to save the world from -- the LIGHTMASTER? No, we're not kidding...

Retrieved from "https://heykidscomics.fandom.com/wiki/Cable_%26_Deadpool_Vol_1_5?oldid=1728237"
Community content is available under CC-BY-SA unless otherwise noted.