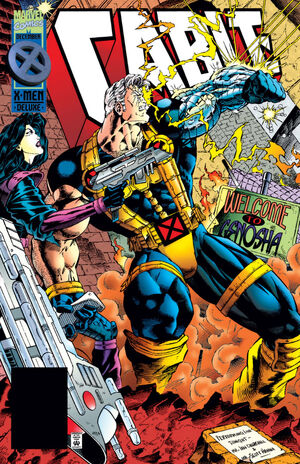 Appearing in "The Long Way Home"Edit

Synopsis for "The Long Way Home"Edit

Phillip Moreau and Jenny Ransome run away from Magistrates that are trying to detain them. They are telling both of them that they are in violation of the curfew that has been issued on the mutant populace. They continue to run and finally escape them. They discuss meeting with a being who has been giving them info and weapons so they can help defend themselves and the mutates from the Magistrate influence over the country. They say this person is running late and then suddenly he appears behind them. Essex announces that he is meeting with them one last time and that they are close to uncovering who is behind the mutate process. They are told that it was not the Genegineer that they always thought it was. Essex does not reveal who is behind it but he says help is on the way.

Domino and Cable are suddenly transported to Genosha from their recent journey into Cable's future timeline. They have not even gotten their bearings when they are attacked by Magistrates telling them that they are in violation of the curfew and they are to be detained until the Chief Magistrate arrives. Cable fights back and then Phillip and Jenny show up and blow up the Magistrate ship. They introduce themselves to each other and Phillip asks if Cable is an X-Man. Cable responds, "not exactly".

Meanwhile, Sugar Man watches a screen and sees that "he" has arrived in Genosha. He says he has been following "him" and now "he" has come looking for Sugar Man. He says that he has kept his secret for 20 years now and that "Nate Grey" will not stop him from his plans. The Sugar Man believes that Cable is "Nate Grey".

Elsewhere, the Magistrate Elite play cards and Pipeline says that he is tired of running errands which they have recently to try to gather up people who are trying to leave the country. He says that the Elite were treated better than that and that now it has all broken down. Hawkshaw says they must kill every rebel and Punchout says that they might get their chance as she plans a raid on the rebel camp.

Cable and Domino are taken to an underground tunnel of Genosha. Phillip says that he has gathered all the rebel mutates in a hidden sanctuary named, "Safehaven". He says that they have a cause worth fighting for and that the mutates gathered here are willing to fight for the cause and right to live. Cable is swayed by this and Domino is left feeling a bit uneasy. Jenny and Phillip discuss their plans and Domino tries to announce her weariness to Cable. Suddenly they are attacked by the Magistrate Elite who say that they are going to kill every one of the rebels. Cable turns and says that they should start with him then.

Retrieved from "https://heykidscomics.fandom.com/wiki/Cable_Vol_1_26?oldid=1717018"
Community content is available under CC-BY-SA unless otherwise noted.