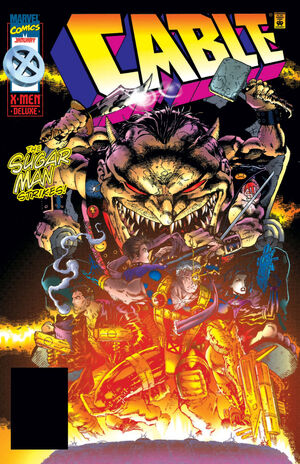 Domino and Cable along with Jenny Ransome and Phillip Moreau watch as the Magistrate Elite have just entered their secret safe haven. The Magistrates begin to attack and Cable realizes that Pipeline, who he has run into before, is going to be their access in and out of the battlefield. Domino says she will take him down. Cable saves Moreau from Hawkshaw who is sneaking up behind him. Cable then sets off a gas grenade while Domino takes out Gunshot and Ransome takes out Punchout. Pipeline teleports the Magistrates out and Cable stops him just as he is about to teleport away.

Cable questions Ransome and Moreau on their duties as rebel leaders and he wants to know who told them of Cable's "help" that he is supposed to be giving them. Jenny tells him that they returned to a war-torn Genosha and they found that the government was corrupt. They then met a man named Essex and he told them that there was a secret behind who is running Genosha and that he was giving them info on who this was. Cable is left uneasy by the name Essex and he tries to remember how he knows it.

Meanwhile, Sugar Man announces that his secret is out. He feels that he knows who talked about his secret. He says that he will fight those who oppose him and it will be a bloody battle.

Cable then interrogates Pipeline. He says that he used to have it all and now it is a big change from the way Genosha used to be. Cable helps him realize that mutates and humans are both suffering and Pipeline still refuses to see what is going on. Cable then tells him that he will see it Cable's way and that he would make him see it that way. Pipeline is then manipulated telepathically into agreeing to help. Pipeline then transports them to the coordinates that Phillip gives him.

The group shows up in the Ridgeback Mountains area of Genosha. Phillip talks about how he cannot believe that he was fooled into believing that his father, the Genegineer, was behind all the suffering of Genosha. They climb up a large mountain and then make it to a cave. They enter and Cable has a feeling that they are being watched. In the shadows, Essex says that the show is about to begin. The group finds a room filled with very sophisticated technology and Phillip realizes that his father alone could not have done all this work. Pipeline is even taken aback by the new revelations. Cable becomes uneasy and says that with this type of equipment it must be being guarded by someone. Sugar Man then watches them on a screen and he grabs his weapons and says that Cable is not "Nate Grey" as he originally thought but a older version of him. He also says that he will fight them and he is not being brought down. Even if it means killing everyone in Genosha to save his secret.

Retrieved from "https://heykidscomics.fandom.com/wiki/Cable_Vol_1_27?oldid=1415854"
Community content is available under CC-BY-SA unless otherwise noted.