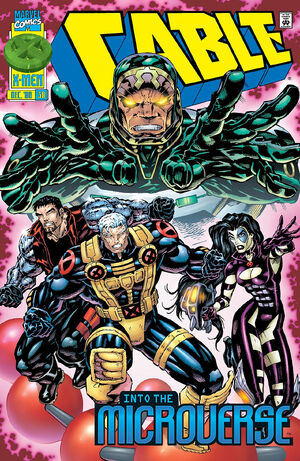 Cable, Domino, and Kane are on a mission to rescue Copycat from Pyscho-Man who has taken her to the Microverse. Upon arrival the heroes are joined by the surviving Mirconauts, Rann, Mari, and Bug. Together, they assault Pyscho-Man's base but things don't go as planned when Cable's Psi-Link is broken and both he and Kane succumb to Psycho-Man's emotion-controlling machine.

Retrieved from "https://heykidscomics.fandom.com/wiki/Cable_Vol_1_38?oldid=1415865"
Community content is available under CC-BY-SA unless otherwise noted.