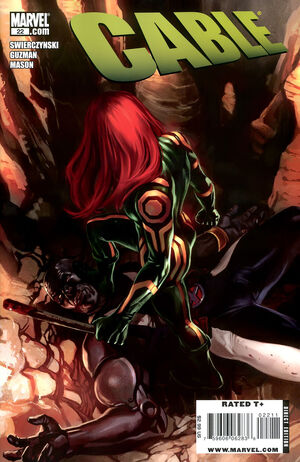 PRELUDE TO “X-MEN: SECOND COMING” EVENT! The penultimate chapter in the X-Men saga that began with “Messiah CompleX” continues here! Now that Hope’s told Cable that she’s ready to join the X-Men in the present, Cable risks it all to repair his busted time machine. Finally, after years of being stuck in a one-way trip to oblivion, Cable and Hope leap into the past. But the Mutant Messiah and her surrogate father miss the mark by more than a few hundred years, finding themselves in a primitive Manhattan – and hunted by a mutant who just doesn’t know the meaning of the word “quit.”

Retrieved from "https://heykidscomics.fandom.com/wiki/Cable_Vol_2_22?oldid=1646269"
Community content is available under CC-BY-SA unless otherwise noted.