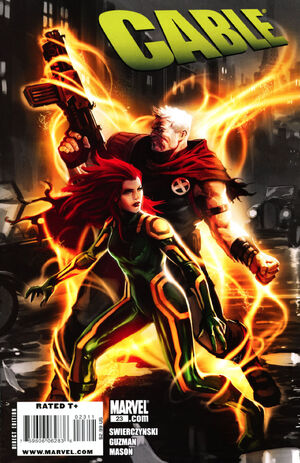 PRELUDE TO “X-MEN: SECOND COMING” EVENT! “HOMECOMING, PART THREE” The penultimate chapter in the X-Men saga that began with “Messiah CompleX” continues here! As Cable and Hope fight their way back to the present, Bishop closes in on their trail, determined to stop them using the deadliest weapons at hand, be it a Prohibition-style tommy gun or heat-seeking brain needles of the near future. Meanwhile, a few decades from now, Cable and Hope meet an old ally who could either save them—or jeopardize everything. This is it…the penultimate issue of the time-hopping action thriller born in the pages of “Messiah CompleX.”

Retrieved from "https://heykidscomics.fandom.com/wiki/Cable_Vol_2_23?oldid=1416195"
Community content is available under CC-BY-SA unless otherwise noted.