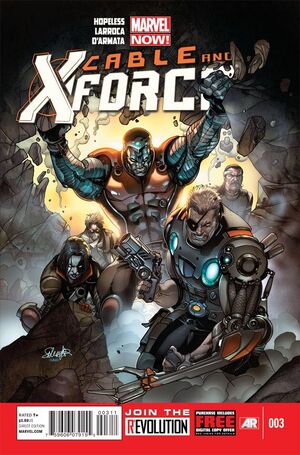 Cable orders the team to attack a civilian company, but with his powers on the fritz will his judgment be brought into question? And see where the mighty Colossus has been since the end of Avengers vs. X-Men!

The Avengers Unity Squad is supposed to promote mutant rights by having Avenges and X-Men work together.

Retrieved from "https://heykidscomics.fandom.com/wiki/Cable_and_X-Force_Vol_1_3?oldid=1645091"
Community content is available under CC-BY-SA unless otherwise noted.