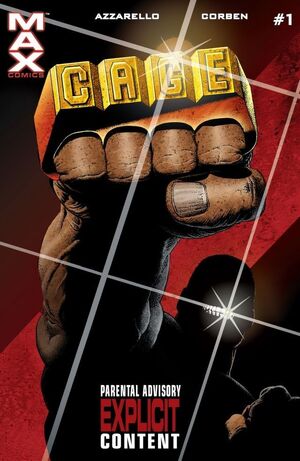 Appearing in "Cage (Part I of V)"Edit

Synopsis for "Cage (Part I of V)"Edit

A woman named Mrs. Dickens walks into a striptease club where she finds Luke Cage enjoying a show. Approaching him, she states that she wants to hire him to exact revenge against the gang bangers responsible for killing her thirteen-year-old daughter, Hope. Luke finishes his business with one of the strippers and agrees to take Mrs. Dickens’ case.

Cage begins muscling in on the gangs congregating on G Street. He interrogates a couple of thugs during a basketball game and learns that the bullet that killed Hope Dickens was originally intended for another gang banger named Clifford "Clifto" Townsend. Upon further investigation, he learns that the triggerman might possibly be linked to Lonnie "Tombstone" Lincoln.

Retrieved from "https://heykidscomics.fandom.com/wiki/Cage_Vol_2_1?oldid=1500244"
Community content is available under CC-BY-SA unless otherwise noted.