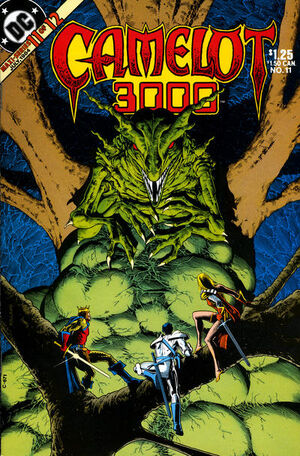 Then we shall meet them in peace, Commander Acton. And I pray I will not have cause to regret my trust.

Aliens take Lady Guinevere and King Arthur to meet their leader, a giant alien queen. The alien queen tells of how Morgan Le Fay came to the planet and using magic, forced the aliens to serve her. The aliens help the knights sneak into Castle Le Fay.

Retrieved from "https://heykidscomics.fandom.com/wiki/Camelot_3000_Vol_1_11?oldid=1415539"
Community content is available under CC-BY-SA unless otherwise noted.