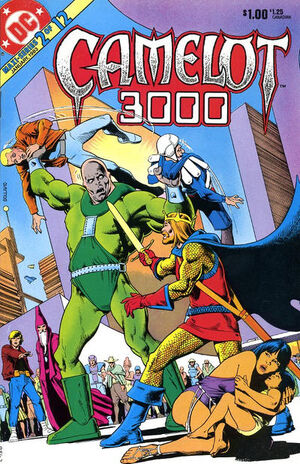 Appearing in "Many are Called..."Edit

Synopsis for "Many are Called..."Edit

At the United Nations building, Neo-Men arrive and begin attacking civilians. King Arthur Pendragon arrives and fights the Neo-Men. A cameraman on the scene captures the whole thing and broadcasts it to the viewing public. Merlin, Tom Prentice and Arthur go inside the building, where Arthur pulls Excalibur from the stone. Seven stars shoot out from the sword and fly to various points around the world. Each star finds a person and inhabits them, imbuing them with the memories and personalities of Arthur's knights and compatriots. Arthur, Merlin and Tom begin gathering his allies. At United Earth Defense headquarters, Commander Joan Acton becomes the Lady Guinevere. In Paris, France, Jules Futrelle becomes Sir Lancelot. In the meantime, Morgan Le Fay schemes against Arthur.

Retrieved from "https://heykidscomics.fandom.com/wiki/Camelot_3000_Vol_1_2?oldid=1415530"
Community content is available under CC-BY-SA unless otherwise noted.