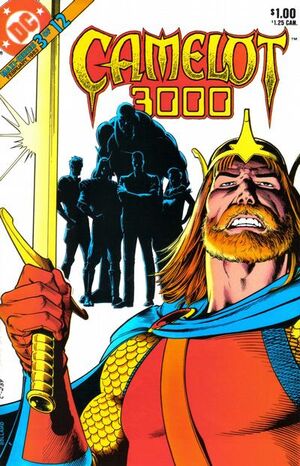 I could have been happy with him, not knowing who I truly was, but no longer.

Merlin tells King Arthur that there is an enemy assembling forces against him. Morgan Le Fay is organizing the aliens that are attacking Earth. Merlin sends Arthur and his allies to find his remaining knights: Percival, Galahad, Tristan and Kay. At United Earth Defense headquarters, the alien ships have been traced to their point of origin: A tenth planet.

Retrieved from "https://heykidscomics.fandom.com/wiki/Camelot_3000_Vol_1_3?oldid=1415531"
Community content is available under CC-BY-SA unless otherwise noted.