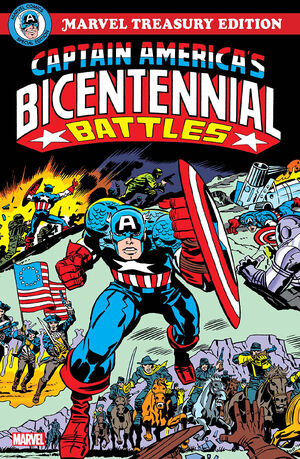 Unable to find his way out, Cap suddenly falls through a trap door and lands in Nazi Germany. Evading some guards he discovers Bucky being tortured by Hitler and Red Skull. Cap frees Bucky and the two escape, but Cap is transported back to Mr. Buda.

Angry at first, Cap eventually thanks Mr. Buda for allowing him to see Bucky again. Cap excuses himself to leave, and Mr. Buda tells Cap to broaden his knowledge as he secretly places a Psychic-Talisman on Cap's palm. Taking a laxi, Cap is transported to Philadelphia in the 1770's. where he meets Benjamin Franklin, who designs the American flag after Cap's uniform. Feeling ripped off and disillusioned, Cap runs off but discovers he is now in New York during The Great Depression. After helping a newspaper boy against some gangsters, Cap discovers the Talisman on his palm and is transported to the America Southwest.

He's attacked by Apaches, but gains the respect of their leader Geronimo with his wisdom. When they are attacked by the US Calvary, Cap desperately tries to stop the soldiers, but is trampled by their horses and he finds himself in a collapsed mine shaft. He uses his shield to dig a way out, rescuing the miners.

After an air-born skirmish in the Great War, Cap is transported back to Mr. Buda, who reminds Cap that history can't be made without turbulence. Cap is suddenly in a boxing match with John L. Sullivan, then freeing a slave from bounty hunters. After Cap departs, John Brown secures the unconscious slavers.

Cap appears at Almagordo to witness the first atomic bomb lest, and he's terrified of the terrible power. He helps rescue people during the great Chicago fire, and then talks with undersea research scientists. Mr. Buda reminds Cap that experience teaches, not people, and sends the hero to the future.

Witnessing a battle on the moon, Cap realizes that people will never stop fighting. Appearing in Hollywood, Cap becomes outraged at the hollow pomp and circumstance, feeling the proceedings are a parody of patriotism. Mr. Buda congratulates Cap for questioning his surroundings, and for thinking for himself. Taking Cap to visit a student, Cap realizes that what makes America great are people who don't complain and just get things done. As Mr. Buda leaves, he reminds Cap that truth is to be shared. Cap finds himself surrounded by children. He tells them that they can grow up to be anything they want.

This is a one-shot treasury-sized special edition, in celebration of America's Bicentennial.

Retrieved from "https://heykidscomics.fandom.com/wiki/Captain_America%27s_Bicentennial_Battles_Vol_1_1?oldid=1416889"
Community content is available under CC-BY-SA unless otherwise noted.