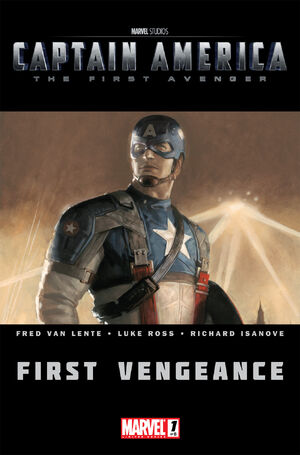 "Surrender?" Don't know the meaning of the word. In any language.

Captain America makes a drop on a HYDRA base in the Nazi-occupied Danish Straits in April, 1944. As he battles HYDRA, he recalls parts of his life that got him to this point: flashbacks to 1924 where Steve Rogers is given blessings by his mama on her deathbed to become a soldier; and to 1930 when he first meets Bucky after James helps him fend off some bullies.

Captain America continues his invasion of an unnamed Nazi/HYDRA-controlled Danish island, and continues to recall how he got here. Flashbacks include: December 7, 1941, the day after Pearl Harbor was bombed, and Bucky (James Barnes) and Steven Rogers decide to enlist; December 11, 16, and 20, where Bucky helps train Steve to pass the physical; and December 24, when Bucky passes the physical but Steve fails.

Retrieved from "https://heykidscomics.fandom.com/wiki/Captain_America:_First_Vengeance_Vol_1_1?oldid=1416911"
Community content is available under CC-BY-SA unless otherwise noted.