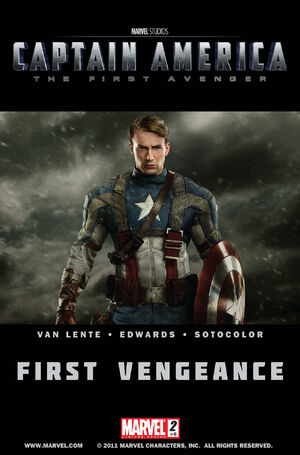 Red Skull looks on as Captain America battles a member of Hydra in a large mech-suit. He puts on a Wagner record as he recalls how he got to this point. He remembers back to Berlin, February 1934, at the Deutsches Opernhaus, where he meets Adolf Hitler. Although Hitler likes his ideas, Graf von Kaufmann does not, and threatens Schmidt to stay away from Hitler. Himmler, however, heard the conversation as well, and takes Schmidt under his wing. Later, Schmidt recalls in June 1934, eliminating the S.A. and getting his revenge on Kaufmann.

Red Skull continues to look on as Captain America defeats the Hydra agent in the exo-skeleton armor. Next, Steve has to battle a tank that shoots electricity. Schmidt remembers back to July 1934, when he continues to eliminate the S.A. and captures Arnim Zola to continue research on creating super soldiers. Another flashback includes that of September 1935 when he finds Abraham Erskine. Erskine is blackmailed into continuing his super soldier research under the employ of the Nazis. The issue concludes with Mr. Stark on the radio telling Steve he has a plan on how to take out the tank.

Retrieved from "https://heykidscomics.fandom.com/wiki/Captain_America:_First_Vengeance_Vol_1_2?oldid=1416912"
Community content is available under CC-BY-SA unless otherwise noted.