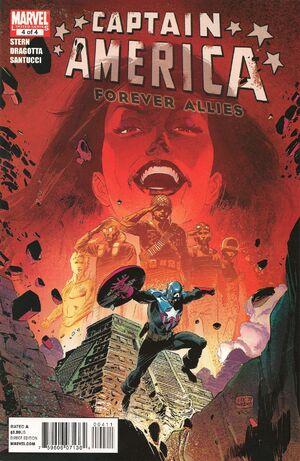 Appearing in "In the Hall of the Gods"Edit

In the heart of the Andes, Lady Lotus seeks out the power of the Celestials themselves. Can Captain America stop her in time? Or will the last, unresolved case of the original Young Allies prove to be his undoing? Roger Stern (INVADERS: EVE OF DESTRUCTION), Nick Dragotta (WEB OF SPIDER-MAN) and Marco Santucci (SIEGE: SPIDER-MAN) guarantee that the answers come fast and furious in this final, fateful, earth-shattering tale -- "In the Hall of the Gods!" Guest-starring the Black Widow and the Falcon!

Retrieved from "https://heykidscomics.fandom.com/wiki/Captain_America:_Forever_Allies_Vol_1_4?oldid=1724906"
Community content is available under CC-BY-SA unless otherwise noted.