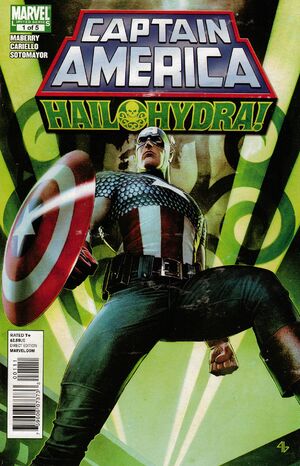 You're either insane or you've crossed a line no one should cross...

In 1944, Adolf Hitler has accelerated his latest version of the Nazi Super-Soldier progam. Dr. Gerst has developed a formula to revive dead Nazis while enhancing their strength and durability. Cap and Bucky have covertly gone to the program's headquarters at Drache Castle in Germany. After some surveilance, Cap and Bucky attack and immediately encounter an enhanced Nazi named Erkling. Cap is surprised at Erkling's strength but is able to punch him out. Unfortunatley, Dr. Gerst has multiple super Nazis who capture the Steve and Bucky. Gerst notes that he wants to study America's super-soldier on one of his slabs. During his examination, Dr. Gerst also explains that his loyalty is not to the Nazis and Adolf Hitler, but to his own mysterious historic organization. Gerst is about to inject Cap with his formula, when Frau Lohn enters the fray with gunfire. She is able to free Cap and Bucky and quickly subdues Dr. Gerst and puts a pistol to his head. At that time Baron Strucker stabs Lohn from behind a curtain and escapes with Dr. Gerst. In the confustion, Strucker and Gerst escape. Cap and Bucky leave Frau Lohn with individuals they believe to be a part of the German Underground movement. It appears that Frau Lohn will survive her stab wound. The tale ends with the two German Underground operatives revealing that they are actually members of HYDRA also!

Retrieved from "https://heykidscomics.fandom.com/wiki/Captain_America:_Hail_Hydra_Vol_1_1?oldid=1476855"
Community content is available under CC-BY-SA unless otherwise noted.