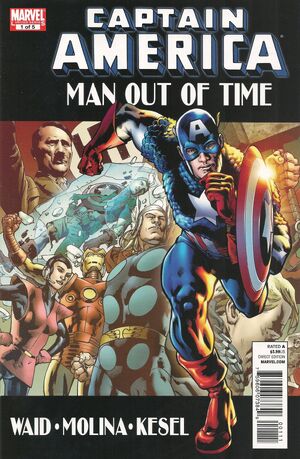 Appearing in "Man Out of Time (Part 1)"Edit

Beginning a five-issue mini-series chronicling the rebirth of Captain America! When the Avengers pull a mysterious, tattered soldier from the sea, they unwittingly bring back to life the Living Legend of World War Two--a man whose memories of a life sixty years ago are as fresh as yesterday! How will Steve Rogers, frozen in suspended animation for half a century, adapt to the world of the 21st century? Brought to you by super-scribe Mark Waid (Captain America, Amazing Spider-Man) and Avengers: Initiative artist Jorge Molina!

Retrieved from "https://heykidscomics.fandom.com/wiki/Captain_America:_Man_Out_of_Time_Vol_1_1?oldid=1657542"
Community content is available under CC-BY-SA unless otherwise noted.