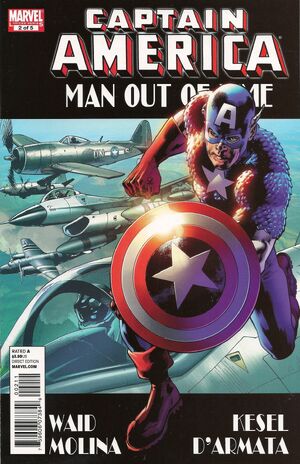 Appearing in "Man Out of Time (Part 2)"Edit

Synopsis for "Man Out of Time (Part 2)"Edit

Captain America is in a hospital recovering from his gunshot wound last issue. His kevlar like uniform (as well as his Super-Soldier stamina) has allowed him to miraculously walk around. His doctor, Dr. Drysart, scoffs that his patient has identified himself as Captain America. He notes that his grandfather served with Cap at D-Day in 1944. Dr. Drysart is shocked when Cap gives the doctor some personal information on his grandfather, including the name of his unit and his girlfriend's name.

Cap leaves the hospital and is awed by the cultural and technological changes since 1945. He is soon met by Rick Jones, a confidant of the Avengers, who has tracked Cap down. Rick notes that Cap was the last person to see the Avengers (last issue) and wants Captain America to help him. Initially, Steve thinks that Rick Jones is his old partner Bucky Barnes. After realizing Rick is not Bucky, Cap quickly appears disinterested in helping young Jones. The Sentinel of Liberty is convinced he is dreaming. However, when Rick angrily leaves, Cap makes a spectacular throw of his shield and an acrobatic launch and says he will help Jones find the Avengers. Rick's internet research leads him to a mysterious looking alien in a Graymercy Park motel. Cap engages the alien and quickly defeats him. The alien tells Rick and Cap he can help the Avengers. However, Cap is preoccupied by yet another shock: Reading an internet account of Franklin Roosevelt's death in 1945, the hero now convinces himself that he is not dreaming.

Retrieved from "https://heykidscomics.fandom.com/wiki/Captain_America:_Man_Out_of_Time_Vol_1_2?oldid=1734714"
Community content is available under CC-BY-SA unless otherwise noted.