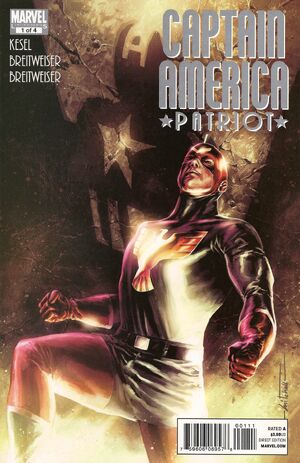 Appearing in "Part One - Born on the 4th of July"Edit

What does it take to be the living symbol of America... the Sentinel of Liberty... the Super-Soldier of World War II? What does it take to be CAPTAIN AMERICA? 1941. Captain America puts on his mask and shield for the first time-- and instantly inspires an entire nation, including Jeff Mace-- a rough-and-tumble reporter— who quickly dons his own star-spangled suit and calls himself the PATRIOT! It's a decision that will take him from stopping stateside saboteurs... to headlining the home front heroes known as the Liberty Legion... to the most unexpected offer of all... ...When the Sentinel of Liberty dies and Jeff Mace is asked to be the NEXT CAPTAIN AMERICA! This is the story of a man who was a great Patriot, and his determination to be something more. His attempt to be not just a hero, but a symbol. His struggle to show he has what it takes to be CAPTAIN AMERICA!

Retrieved from "https://heykidscomics.fandom.com/wiki/Captain_America:_Patriot_Vol_1_1?oldid=1657314"
Community content is available under CC-BY-SA unless otherwise noted.