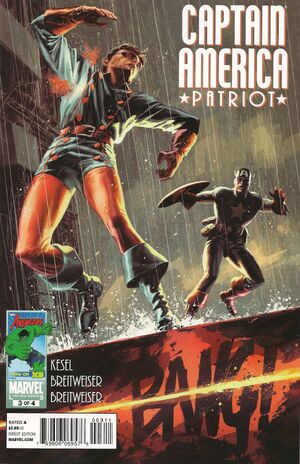 BUCKY SHOT! NEAR DEAD! CAP RELENTLESSLY PURSUES GUNMAN! In a story that changes his life forever, Jeff Mace must prove he's not just worthy of being Captain America, but worthy of being Bucky's partner as well. Making matters worse: he thinks he knows who pulled the trigger... but hopes with all his heart he's wrong. Guest-starring the Sub-Mariner, original Human Torch, and other All-Winners Squad members... plus the dazzling debut of Golden Girl! After this, nothing will ever be the same for Captain America...

Retrieved from "https://heykidscomics.fandom.com/wiki/Captain_America:_Patriot_Vol_1_3?oldid=1657336"
Community content is available under CC-BY-SA unless otherwise noted.