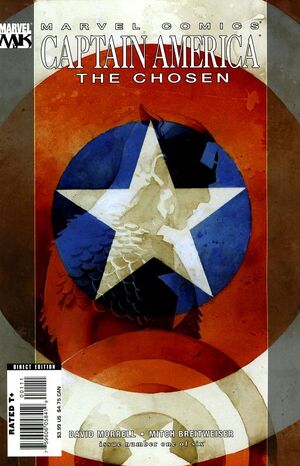 You're braver than you think.

Appearing in "Now You See Me, Now You Don't"Edit

Synopsis for "Now You See Me, Now You Don't"Edit

In Afghanistan, an outfit of the United States Marine Corps is fighting insurgents and operatives of Al-Qaeda. The story itself focuses on Corporal James Newman and his inner struggles. Newman's unit has been dispatched to a nearby village where smoke has been spotted. His thoughts show his opinions on why he is fighting and also his confusion as to who it is that are targets. His mind is also occupied with thoughts about his wife, Lori, and his five-month-old son, Brad, in San Francisco. His convoy is ultimately attacked in town, with Newman fighting a fierce gun battle with the residents. Entering a home after taking out a gun-totting man, he encounters a native couple and he begins to let his fears almost get the better of him. It is at this time of indecision that, out of nowhere, Captain America show up to impart some words of wisdom. Bolstering Newman's courage, the two men spring to action and save two fellow troops.

After the skirmish, Newman is a bit dismayed to find out no one else had seen Captain America helping him. In fact, several of the men said it was Newman who single-handedly did the saving. Newman, now a bit shaken from this revelation, begins to wonder if fighting for so long has begun to take a toll on his sanity. The issue ends with a shot of Captain America on a sort of respirator, being attended to by a woman and a mysterious man (Nick Fury) while a monitor behind Captain America shows Newman on the battlefield.

Retrieved from "https://heykidscomics.fandom.com/wiki/Captain_America:_The_Chosen_Vol_1_1?oldid=1417181"
Community content is available under CC-BY-SA unless otherwise noted.