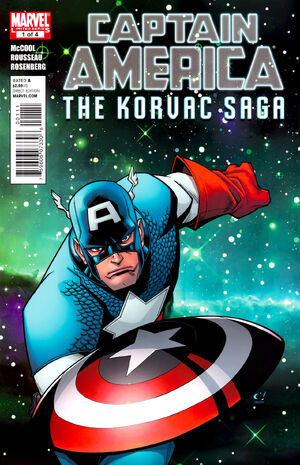 I call it time displacement. Welcome to the club.

The Avengers are battling a combination of villains in Central Park: Living Laser, Quasimodo, Maelstrom, and the Super-Adaptoid. These villains appear to have their powers enhanced and they are providing more of a menace to the Avengers than normal. Captain America notes that something is out of order and has the Vision take him to a nearby home where the distortion appears to be taking place. They find a man named Michael Korvac with a computer. Captain America asks him to stand down. When Korvac does not, Cap punches him and the villains in Central Park immediately lose their new weaponry. Korvac and the Super-Villains are apprehended and taken to jail.

Later, Cap has a graphic dream about his past: Bucky's "death", the Red Skull, being found on ice by the Avengers. When he awakens, he goes back to the jail and confronts Korvac. He tells Korvac that he has has noted that Michael hs no identification records whatsoever and demands to know who he really is. Before any answers are given, the Guardians of the Galaxy invade the police station and demand that Cap step aside as they take into their own custody the 31st century's most wanted entitity": Michael Korvac! TO BE CONTINUED!

Retrieved from "https://heykidscomics.fandom.com/wiki/Captain_America_%26_the_Korvac_Saga_Vol_1_1?oldid=1416242"
Community content is available under CC-BY-SA unless otherwise noted.