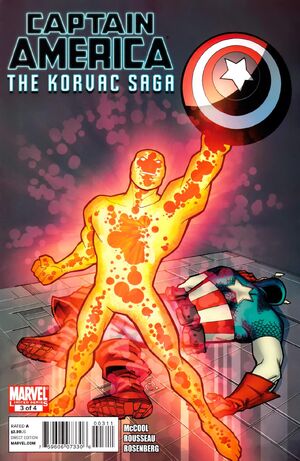 Cap, Nikki, and Firelord pursue Michael Korvac to the Year 3003 and Galactus' Ship. Cap and Nikki look for the Ultimate Nullifier while Firelord battles Korvac. However, before the Nullifier is found, Firelord is defeated and knocked through the hull of the ship. Korvac appears triumphant... or is he? To be Continued.

Retrieved from "https://heykidscomics.fandom.com/wiki/Captain_America_%26_the_Korvac_Saga_Vol_1_3?oldid=1416244"
Community content is available under CC-BY-SA unless otherwise noted.