Start a Wiki
Part of the 'Citizen Kang' event 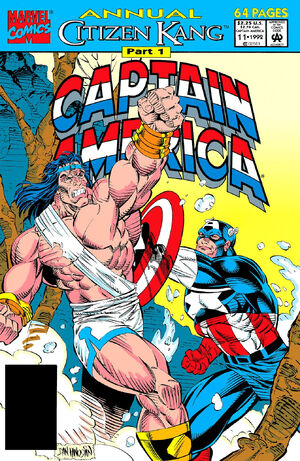 Why do I feel like Kafka's hero in "The Castle"?

The Vision has been reported missing after he investigated an incident in Tiemly, Wisconsin. Cap goes to Timely to search for his fellow Avengers. In a surreal turn of events, Cap appears to go back in time and encounters the Eternals' Gilgamesh and a young Sersi.

Cap and Diamondback discuss who his top villains have been.

A design of Cap's indestructible Shield

The Falcon gets a new uniform, new equipment, and new wings and shows he knows how to use them as he aids an old neighborhood friend who is in trouble with the nefarious Taskmaster.

Appearing in "Birth of a Warlord"Edit

Synopsis for "Birth of a Warlord"Edit

The time traveling Kang the Conqueror details his early history including his time as Rama Tut and the Scarlet Centurion.

Retrieved from "https://heykidscomics.fandom.com/wiki/Captain_America_Annual_Vol_1_11?oldid=1491427"
Community content is available under CC-BY-SA unless otherwise noted.